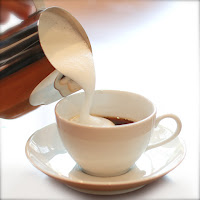 
Steamed milk is produced by heating the milk with the steam wand. Steamed milk is less dense than frothed milk, although it may still have a bit of foam on top. To steam milk, you need to place the tip of the steam wand just under the surface, positioning it in such a way that creates vortex, causing the milk to spin in the
pitcher. This will result in the milk being heated evenly. Using a frothing thermometer, you will be able to tell when your milk has reached the ideal temperature, so that you know when to stop steaming. Steamed milk is the cornerstone of the traditional latte.

Frothed milk is produced not only by heating the milk with the steam wand, but by using it to inject air into the milk, creating small bubbles that will become the foam on your cappuccino. To froth milk, you should also place the tip of your steam wand just above the surface of your milk. However, you will need to continually lower your frothing pitcher as the milk expands in volume. As with steaming the milk, you will want to position the wand so that it creates a vortex in the milk. A traditional cappuccino is made with the ratio of 1/3 espresso - 1/3 steamed milk - and 1/3 frothed milk.